ERROR: Cookies are blocked due to unexpected output. For help, please see this documentation or try the support forums.

The principle of our life is to achieve and live as well as possible a balance between family, economic trade and social engagement.

An important pillar is our investments in embedded software & test.
The base of our responsible behavior as shareholders of ProIT can be found at www.kartmann-group.de

People from West and East, their traditions, the technology, curiosity and volition, united in a services mentality are the principles on which the applied management principle is based.

Through dynamism, flexibility and performance, the requirements and standards of our customers are met quickly without losing sight of the company’s goals.

We are trying to build and consolidate a business that has a close and loyal relationship with our customers and our employees as a foundation and a sincere and open communication.

As the sole shareholder, the Kartmann family is directly and actively involved in the management of the company.

ProIT together with the other family’s business is part of the Kartmann Group. Kartmann Group is implicated both in business in high class technology and in the environment field. The base of our responsibility behavior as shareholders of ProIT can be found on www.kartmann-group.de 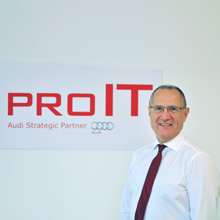 Roland Kartmann was born in Sibiu in year 1961 and studied at the University of Bucharest in the filed geology/geography. In 1986 he decides to move to Germany, where he studies informatics and economics in Munich. Roland Kartmann lives in Bavaria since 1986.F

Roland Kartmann has been married since 1983 to Anna-Maria Kartmann and they have twin daughters. Their daughters study Master of Science and Engineering at the universities of Vienna and Düsseldorf.

Before 1997, when he started building his own business, Roland Kartmann was the general manager of Parametric Technology GmbH (PTC) and Structural Dynamics Research Corporation GmbH (SDRC) for Central and Eastern Europe, whereby both companies were American software and services companies. Among the services offered by these companies during that time were the development of CAD and FEA solutions and Data Management.

Knowing the Romanian, German and American ways of life and the languages spoken in these countries, he understands very well the principles, which are necessary for building a nearshoring business.

He has a passionate interest in cars, especially for sports cars and electric cars. He likes to travel, appreciates good food, has a passion for sailing on catamarans and skies in winter.