ERROR: Cookies are blocked due to unexpected output. For help, please see this documentation or try the support forums. 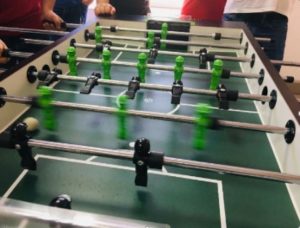 The French inventor Lucien Rosengart discovered the concept of table football in the 90´s to entertain his grandchildren on the long winter evenings. Table football is an active, team-strengthening and exciting alternation not only for children – also for adults.

Congratulations to the winning team!

2019 / 02 RESEARCH AND DEVELOPMENT AND HIGH-TECH CATEGORY

2017 / 11 ProIT REACHES 1. PRIZE IN THE AREA OF RESEARCH, DEVELOPMENT AND HIGHTECH